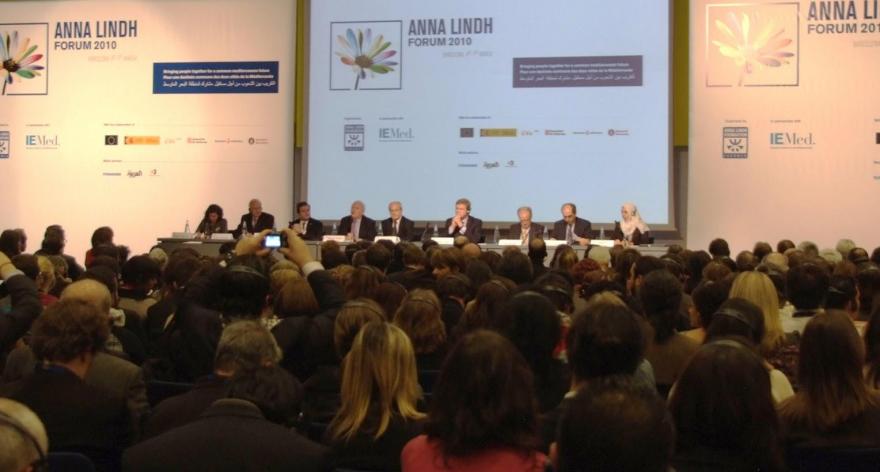 “We have witnessed first-hand how the Anna Lindh Foundation represents today a true north, south partnership, and the Foundation has demonstrated on the global stage its unique capacity as a credible, serious and committed actor with a defined long-term strategy and mandate for dialogue action.”

The first decade of the 21st century has witnessed the apparent growth in the gap of mutual perceptions between people across the two shores of the Mediterranean, as well as the serious impact of conflicts and economic crisis on intercultural relations in the Region. In this context, and with the support and collaboration of the governments of the Union for the Mediterranean and the European Commission, as well as regional and international networks, the Anna Lindh Forum brought together, for the very first time, over 700 civil society representatives from all forty-three Euro-Mediterranean countries.

The Barcelona Forum 2010 was organized by the Anna Lindh Foundation, in partnership with the European Institute of the Mediterranean-Head of the Anna Lindh Civil Society Network in Spain. This Forum included plenary debates, press briefings and the closing session, which was held at the International Convention Centre Palau de Pedralbes in Barcelona, Spain.

In the framework of the “Anna Lindh MedForum 2010”, the Foundation held 4 preparatory meetings entitled:

“Creativity, Mobility, and Dialogue”: The meeting was organized in cooperation with the Anna Lindh Foundation Head of National Network in Greece (The Hellenic Foundation for Culture) and the FAM Network and took place in Rhodes from 1 to 4 October 2009. The workshop focused on 4 main areas which are crucial keys to the development of artistic and cultural collaborations:

A seminar on “Euromed Youth Policies and Participation in Intercultural Dialogue”, which was held on January 25-28 2010 in Strasbourg, France. This seminar gave an insight into the youth policies in the Euro-Mediterranean region and the status of cooperation and coordination between the different actors of the Euro-Mediterranean region. This preparatory seminar came out with recommendations focusing on 4 main themes:

“Cities, Migrants, and Diversity: Valuing Diversity, Understanding Migration”: The Meeting was organized in cooperation with the Foundation´s Head of National Network in Germany - the Goethe Institut – and took place in Munich, Germany, from 10 to 13 February 2010. The meeting came up with the following topics for follow-up discussion:

“Challenges and Solutions for Inter-religious Co-existence in the Euro-Mediterranean Region” held 26-29 October 2009 in Tirana, Albania. Such a meeting was organized in collaboration with the ALF Head of Network in Albania (the Albanian Forum for the Alliance of Civilizations) and included three roundtable discussions on education and religious diversity, civil society and inter-communal harmony, and the role of religious leaders and practitioners.

The website encountered an unexpected error. Please try again later.
TypeError: Argument 1 passed to Drupal\Core\Render\Element::children() must be of the type array, null given, called in /usr/www/users/annalind/dev-site/core/modules/views/src/Plugin/views/filter/FilterPluginBase.php on line 952 in Drupal\Core\Render\Element::children() (line 72 of core/lib/Drupal/Core/Render/Element.php).